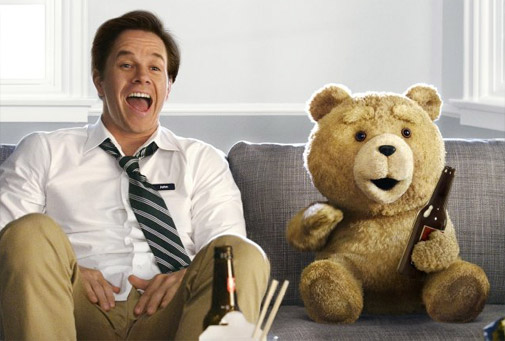 Clay and I saw Ted yesterday and, although I had little to no expectations, it was much better than I thought it would be. My biggest worry was that it would be a really long Family Guy episode, but it had a decent plot and pretty good character development. Some parts were definitely hilarious and others a little too forced. The best thing this movie accomplishes is showing me I can enjoy a Mark Wahlberg movie. (Ok, ok, I did like the Italian Job but I don’t think anyone’s claiming that’s a masterpiece of cinema.)

For fans of Family Guy, it will be difficult to separate Ted from Peter Griffin, and even harder to feel normal about Lori sounding so much like Meg. Giovanni Ribisi steals every scene he’s in, and a cameo by Ryan Reynolds will make you giggle. All in all, it’s a fun little film, but nothing to write home about.