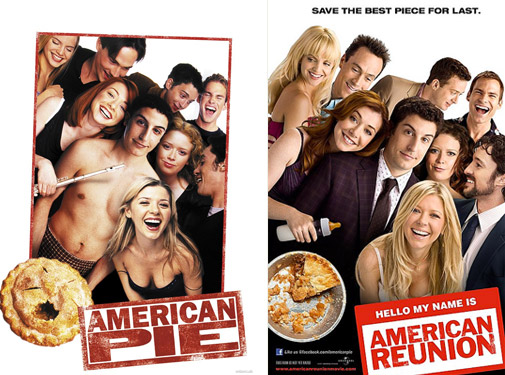 American Pie was never a promise of great cinema. If you were ever expecting that, then you probably didn’t see it. It was a raunchy coming-of-age film about four high school seniors trying to lose their virginities. And that’s all it was ever trying to be. In the process it created culturally iconic phrases (One time, at band camp… and MILF are two examples) and launched the careers of many young actors. Two theatrical sequels and countless straight-to-DVD spinoffs later, it seemed the American Pie franchise was old news. Then, the producers decided to play off something even more American than apple pie: nostalgia.

I was 14 when the original American Pie hit theaters. Because the movie was rated R, we had to do the whole ticket-to-a-different-movie switcheroo. When you get past all the gross-out stuff and the teenage boy stuff, it was certainly a movie I could relate to. It was the summer before I started high school and many of my friends were headed to different schools around the city. It felt like the last summer we would all be together and things would never be the same afterwards. It is a youth-defining movie, that captures the difficult changes teenagers deal with and how your senior year can be simultaneously the best and worst of your life.

American Reunion follows the boys as they return to their hometown for their 13-year high school reunion. The actors all look noticeably older reinforcing that, no matter how much we deny it, it actually has been a long time since the original American Pie. Reunion delivers even grosser comedy and Seann William Scott again proves this franchise should have been called The Stifler Show.

This time around the boys, ahem, men realize their lives are not what their high school selves envisioned them to be, for better or worse. They encounter temptation, career embarrassment, and “the one that got away.” Reunion cleverly combines the nostalgia of high school with the nostalgia of the 90s. And even better yet, it capitalizes on the “where are they now?” fascination we all have. (That’s what Facebook is for anyway, right?) If not for the nostalgic value, you may want to see it because it’s pretty damn funny.