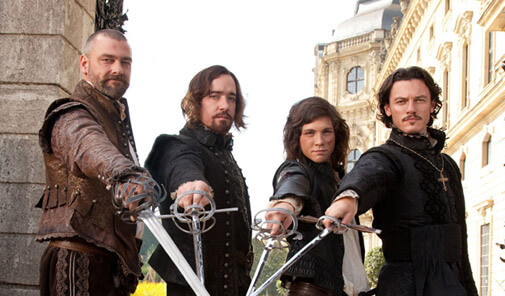 It’s true. No Three Musketeers movie will ever be able to top the 1993 Disney version starring Charlie Sheen, Tim Curry, Kiefer Sutherland, and Chris O’Donnell. A good way to try is to cast talented actors like Christoph Waltz and Matthew Macfadyen, to feature beautiful shots of 17th century Paris and Versailles, and to steampunk the crap out of it. Unfortunately, the rest of the film, while occasionally impressive in 3-D, just can’t hold up. Logan Lerman, or Percy Jackson as I know him, plays D’Artagnan and remains unconvincing the entire film, never really proving he’s leading man material. The accents are numerous and inconsistent, some English, some French, and some Californian.

It’s not all bad, however; there are certainly some bright lights. The action is fun and the scenery, especially for a Paris enthusiast, is exciting and special. The absolute best part of the film is Freddie Fox as scene-stealing King Louis XIII. With humor and flamboyance, his delivery is great. While I probably wouldn’t recommend the film to most, it’s still a fun and sometimes funny reinterpretation.

Tagged film
My X-Factor Top 5 The Dude at IKEA