Moneyball: a (sort of) Underdog Story 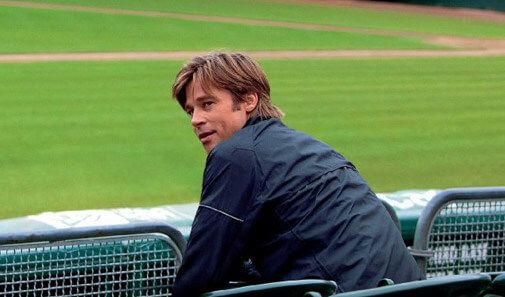 I’m not a fan of baseball. I never have been. I grew up in a basketball home, living and breathing hoops and the Phoenix Suns. Even after I married an avid baseball and Minnesota Twins fan, I really only watch baseball games for the hotdogs. Needless to say, I was skeptical about Moneyball, a film about the business and scouting aspects of the sport. But, I’m a sucker for underdog sports movies so I tagged along with a couple friends.

Brad Pitt plays Billy Beane, the General Manager for the Oakland A’s, who takes a chance on a young Yale graduate (Jonah Hill) and re-imagines how to assess the value of players. While there is a lot of sports talk and not a lot of sports action, the several talented actors make it enjoyable for non-sports enthusiasts. And that’s as best I can put it: enjoyable. The film did lack a lot of the gut-in-your-throat anticipation and the throw-your-hands-up-and-cheer/cry moments I look for in a sports underdog film. It’s no Miracle or Remember the Titans, but it is still very much worth seeing.

The best parts of the film are, undoubtedly, Jonah Hill’s awkward but hilarious performance as the fictional Peter Brand and Kerris Dorsey as Beane’s sweet, guitar playing and singing teenage daughter.