Guilty pleasure movies. You know the ones. You hesitate before admitting you love them. When one comes on TV, you cancel all plans to watch it for the 167th time. You know all the lines and, if applicable, all the choreographed dance moves. Whenever I’m feeling down, I know I have a go-to list of guilty pleasure movies that never fail to brighten my day. Here’s my top ten. What’s on yours? 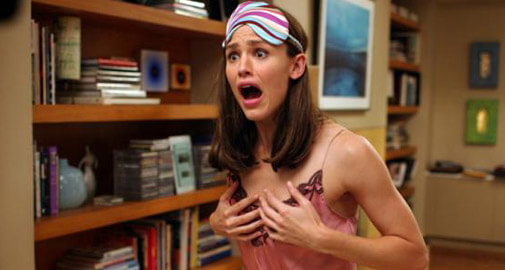 13 Going On 30
A fun and romantic comedy about a 13-year old who wakes up one day 17 years in the future. She discovers she has everything she’s ever wanted, but realizes all of it means nothing without the people she loves. Although the plot isn’t anything groundbreaking, Jennifer Garner is hilarious and charming. It has everything you could ask of a romantic comedy: 80s pop culture, a fun leading couple with chemistry, and a choreographed dance scene to Michael Jackson’s Thriller. Best Line: “Make it a pina colada, not virgin. Do you wanna see my ID? Totally have it.” 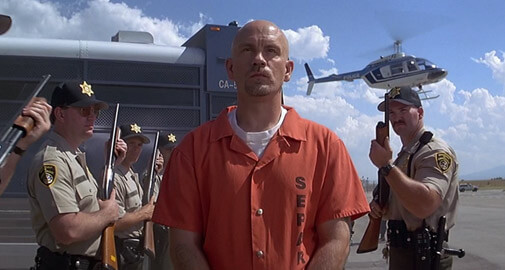 Con Air
Nicholas Cage plays Cameron Poe, a recently freed convict who finds himself on the wrong flight. He manages to outwit and take down a plane full of the country’s worst criminals. While I often find myself defending Cage’s acting abilities, I’ll admit he’s pretty terrible in this one. But that’s what makes it so great. His hair, his horrible accent, and the cheesy one-liners just suck you in. John Malkovich is brilliant as Cyrus the Virus and Steve Buschemi is convincing as super creepy Garland Greene. Even though I’ve seen it dozens of times, I still have to make sure he gets to meet his daughter. Best Line: “Why couldn’t you put the bunny back in the box?” 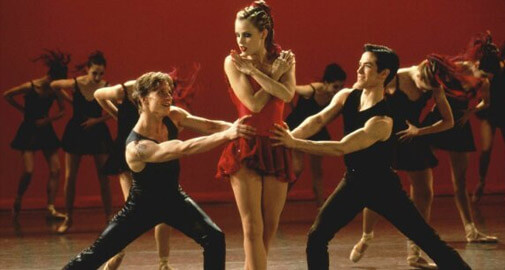 Center Stage
I dare you to show me a choreographed dance scene I don’t love. Center Stage combines the drama of young adulthood with the captivating theatre of modern ballet. While the acting feels forced the entire time, the dancing is fun and memorable. If more ballets were set to Michael Jackson, I could certainly get into it. Plus, throw in a couple Mandy Moore songs and you’ve got me. Best Line: “What, did you go to a special bitch academy or something?” 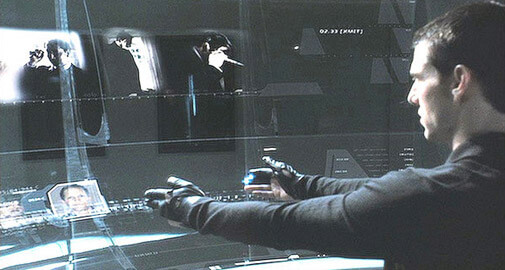 Minority Report
Tom Cruise plays John Anderton, a detective for Washington DC’s Precrime Division. After the Pre-Cogs predict he, himself, will commit murder, he runs for his life desperate to prove his innocence. Minority Report presents an interesting concept of future crime fighting, while posing the question of whether intentions can be judged as equal to actions. While it’s no Oscar winner, it’s safe to say the premise and execution of this movie are just, well, cool. Best Line: “But, it’s not the future if you stop it.” 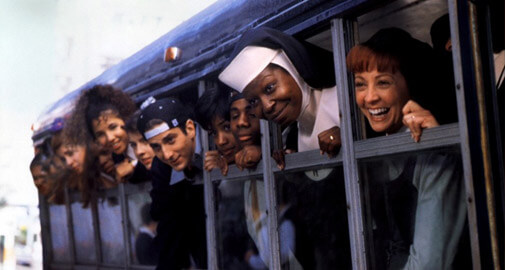 Sister Act 2: Back in the Habit
Before Glee, there was Sister Act 2. Our favorite singing nun returns to help the St. Francis Academy music class. The class is full of losers who have no plans or hopes for the future, but with Sister Mary Clarence in the house, they realize their full potential. It’s a classic underdog story complete with choir songs and a young Lauryn Hill. I still keep their versions of Oh, Happy Day and Joyful Joyful on my iPod for the occasional sing-along. Best Line: “If you wanna be somebody, If you wanna go somewhere, You better wake up and pay attention.” 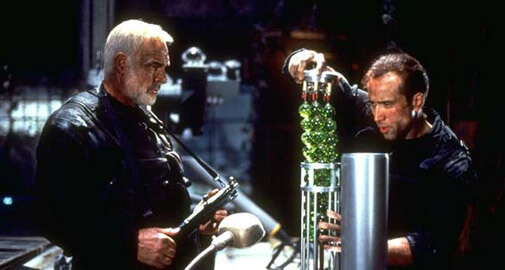 The Rock
Another Nicholas Cage movie on which I am hooked. This time, he plays Stanley Goodspeed, a scientist sent with a team of special forces to Alcatraz in order to stop a rogue military unit from committing biological terrorism. He is perfect as this fish out of water, forced to work together with Sean Connery’s John Mason, a master criminal and escape artist. The clock is ticking down and California’s only hope is a goofy scientist who collects Beatles vinyl. Best Line: (must be spoken in Sean Connery voice) “Welcome to the Rock.” 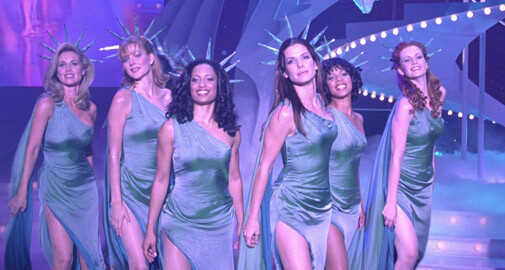 Miss Congeniality
I love me some Sandra Bullock. In Miss Congeniality she plays tough cop Gracie Hart who gets a major makeover and goes undercover in the Miss United States Pageant. Her on-stage antics and kick-ass self defense moves are hilarious and Michael Caine makes the movie as Victor Melling, Gracie’s pageant coach. Particularly fun are her transformation from ugly duckling to hottie and the creepy sing-along to the “Miss United States” theme. Best Line: “I’m sorry, what was the question? I was distracted by the half-masticated cow rolling around in your wide-open trap. ” 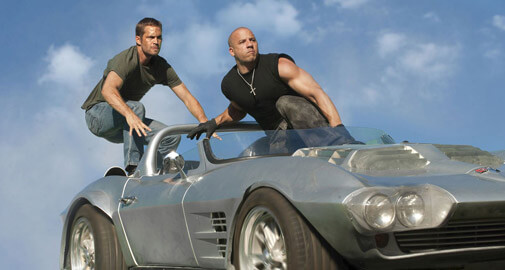 The Fast and the Furious Movies
Many are surprised when they find out I love the Fast and Furious movie franchise. I’m a classically timid and terrible driver with plenty of accidents under my belt and a severe hesitation for going above the speed limit. Even so, I certainly do love watching these guys drive fast. These movies know exactly what they are and they don’t take themselves too seriously. People want to escape, watch sweet cars go fast, make crazy maneuvers, and occasionally blow up. Paul Walker and Vin Diesel aren’t known for their dramatic acting abilities, but I could watch them all day as long as they’re behind the driver’s seat. Best Line: “Ask any racer, any real racer. It doesn’t matter if you win by an inch or a mile; winning’s winning.” 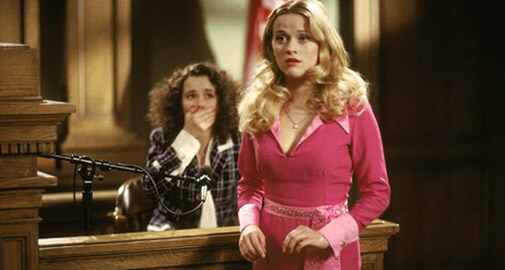 Legally Blonde
A pretty iconic movie of our generation. I’m sure every cute, blonde-haired girl who applies for law school gets the Elle Woods comparison. Reese Witherspoon perfectly plays shallow, but compassionate Elle who defies all expectations and judgements to become a successful and honest lawyer. Along the way she charms teachers and manicurists alike with her bubbly personality and signature pink style. I can quote this entire movie and yet I still can’t not watch it when it’s on TV. Best Line: “Oh, sweetheart, you don’t need law school. Law school is for people who are boring and ugly and serious. And you, button, are none of those things.” 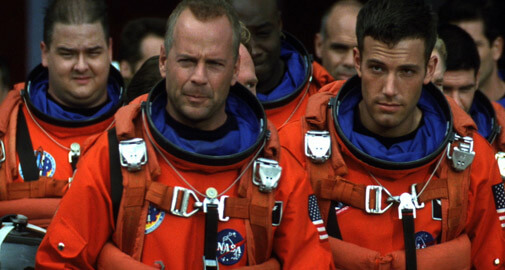 Armageddon
The most epic “asteroid might hit the Earth” movie of our time. I love everything about it, especially the cheesy performances from Bruce Willis, Ben Affleck, and Billy Bob Thornton. The world finds itself in the path of an asteroid the size of Texas, coined a “global killer.” Luckily for us, we have Harry Stamper, the universe’s best oil driller to save the day. How anyone could not love a triumph over certain doom story like this, well, I don’t know. While I cringe a little at the animal cracker scene, I cheer when Harry tells Houston that “you have a problem,” and cry like a baby when Harry sacrifices himself for A.J. and, technically, the entire planet. Best Line: “Well, our object collison budget’s a million dollars. That allows us to track about 3% of the sky, and beg’n your pardon sir, but it’s a big-ass sky.”

Tagged film
So Say We All I Dream of Paris