My Favorite Moments from “The Office”

As you may know, I love The Office. I love watching marathons on DVD and quoting episodes with friends. When I sat down to think of my favorite moments from the show, I ended up with a list 40 items long. I really tried to narrow it down to the moments I always go back to, the ones I always have in my head, and the ones that make me laugh most. To make it easier, I limited this top ten list to seasons 1-4. Although I do love the newer seasons, the first four were absolute gold. I’m positive many will disagree on these, but trust me, there were plenty of moments I thought I just couldn’t leave out. I managed to get the list down to ten favorites, but it was really hard. That’s what she said. 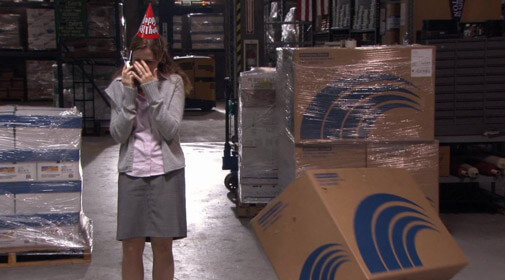 Dwight hides in a box in The Alliance from season 1
Who could forget all the hilarious pranks Jim has pulled on Dwight over the years? Moving his desk into the bathroom, making him want a mint at the sound of computer restart, and putting all his belongings in the vending machine were all classics. Still, one of my very favorites was when Jim convinced Dwight to create an alliance and hide in a cardboard box in the warehouse. I can’t help but laugh thinking about Pam losing it as Dwight scooted and tipped the box trying to overhear her phone conversation. 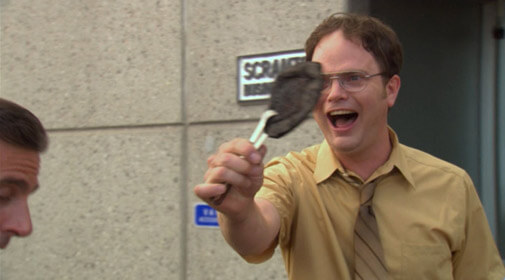 Dwight sings about Ryan starting the fire in The Fire from season 2
When Ryan started the fire with his cheesy pita, Dwight couldn’t help but taunt him. While Ryan knew a thing or two about business and had the loving attention of Michael for the day, Dwight so perfectly inserted Ryan’s embarrassing moment into Billy Joel’s famous tune. Now whenever I hear that song, I can’t help but sing Dwight’s lyrics instead. 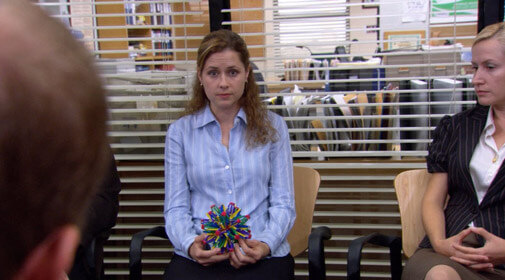 The office tells stories about losing loved ones in Grief Counseling from season 3
Although Jim’s pranks on Dwight are always hilarious, I especially love the collaborative pranks the office plays on Michael. One of the great ones was when Michael requested they all share stories of lost loved ones. They didn’t skip a beat, describing famous movie deaths from Million Dollar Baby, The Lion King, and Weekend at Bernie’s. 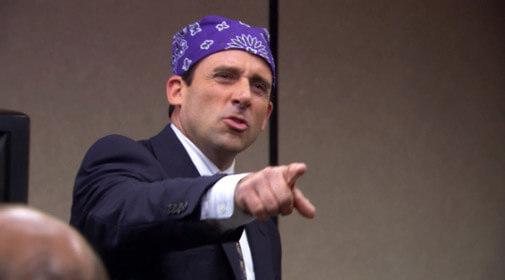 Prison Mike shares his story in The Convict from season 3
Of all Michael’s alter-egos, Prison Mike is my favorite. He kept it real and told everyone how bad it was “in the clink.” He ate gruel and had to avoid the dementors flying around. And the very best part was when he told Ryan he’d be “the belle of the ball.” Don’t drop the soap! 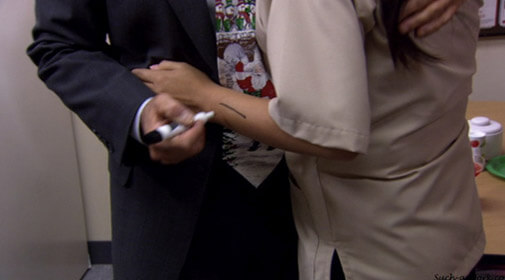 Michael marks the Asian waitress in A Benihana Christmas from season 3
Michael isn’t strong in the racial sensitivity area, as clearly demonstrated in season 1’s Diversity Day. But his best racial issue happened at their annual Christmas party. After having dinner at Benihana, they invited two of the Asian waitresses to join them at the party. While singing karaoke, Michael realized he couldn’t tell the two apart. So he covertly marked one of them with a Sharpie. Problem solved. 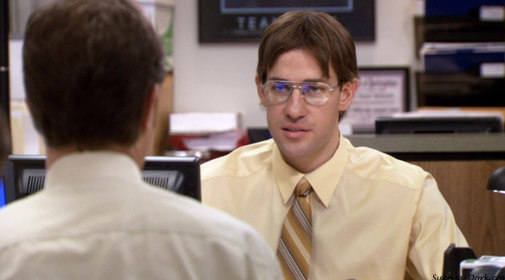 Jim dresses up as Dwight in Product Recall from season 3
This one really only needs four words: Bears. Beets. Battlestar Galactica. 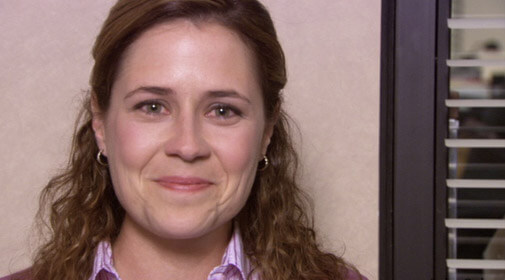 Jim returns from NY to ask out Pam in The Job from season 3
I love the episode Casino Night when Jim finally confessed his love for Pam. We waited all of season 3 with high hopes they would stop messing around and date already. With the corporate job and Karen in the picture, no one knew if Jim and Pam would be separated for good. Luckily a yogurt lid snapped him back into reality and gave us the best “Yessss!” moment of the entire series. Pam’s face says it all. 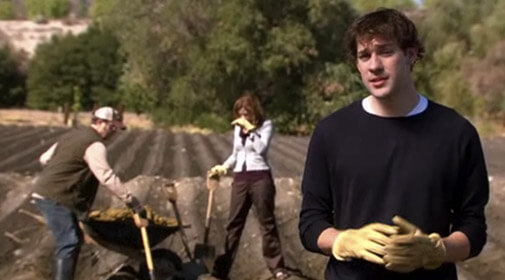 Pam and Jim visit Schrute Farms in Money from season 4
Throughout the series, we received brief, but wonderful glimpses of Dwight’s cousin Mose and strange stories about their family’s beet farm. In season 4, Jim and Pam spent a night there and hilarity ensued: Mose greeted them by running beside their car, the America, nighttime, and irrigation themed rooms, manure fights and table making demonstrations, and of course, the Harry Potter bedtime story. 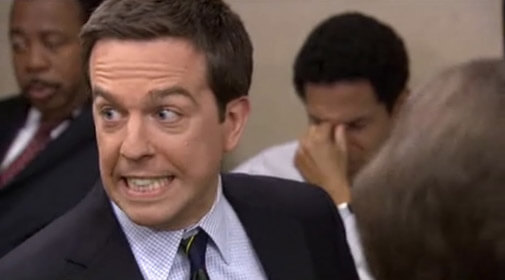 Andy can’t remember the KitKat jingle in Local Ad from season 4
Everyone knows what it’s like to forget something so familiar. When Andy couldn’t remember the ending lyric to the KitKat jingle, Jim wouldn’t allow anyone to tell him. So logically, he filled in the blank until he got it right. After he tried “Chrysler car”, “Claude Van Damme”, and “hair for men”, he finally figured it out. “Break me off a piece of that Fancy Feast.” (And of course, now that’s how I have to sing the jingle too.) 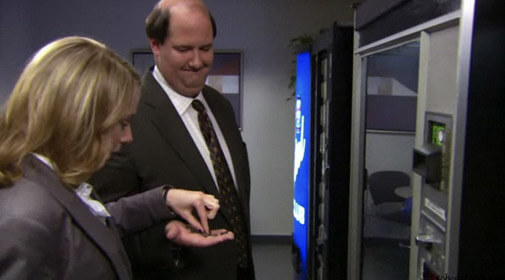 Holly helps Kevin buy a snack in Goodbye Toby from season 4
Poor Holly. After Dwight told her Kevin was retarded, every interaction the two of them had seemed to support it. The best moment between them was when Holly helped Kevin pick out a snack from the vending machine. She counted his change, removed a button from the pile, and showed him which row he could choose from. And, naturally, Kevin then claimed he was “totally gonna bang Holly.”

Tagged television the office
Grandparents 26 Before 26: a Retrospective