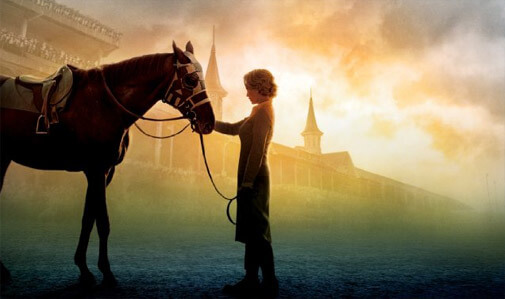 When I told my friends I was excited to see Secretariat, I received a lot of scoffing. They compared the movie to Seabiscuit and claimed they “don’t want to see a movie about horses.” Well, I don’t know about them, but I usually love movies about horses. The Black Stallion, Wild Hearts Can’t Be Broken, and Hidalgo are all amazing films. On top of that, Secretariat is a Disney film starring the talented Diane Lane and John Malkovich. I couldn’t see it soon enough.

Many will argue that Secretariat is formulaic, but the formula works to produce uplifting, family-friendly films that focus on determination and truly capture the essence of their subjects. I compare Secretariat to two other successful Disney sports films: Miracle and Remember the Titans. They all take a true and culturally significant event, put human faces on them, and, even though we all know what the outcome will be, manage to create nail-biting tension and anticipation.

It captures what was so great in The Blind Side: a powerful, determined woman taking what no one believed in and turning it into a star. But what I missed in The Blind Side was a feeling of love and respect for the sport of football. The actual football scenes were short and far between. Secretariat perfectly stitches in beautiful and heart-wrenching racing scenes that truly embody the passion of the trainers, the skill of the jockeys, and the raw strength of the horses.

It’s an amazing film that is suitable for all ages and promotes values like determination under pressure, faith during adversity, protecting one’s family, but also one’s pride, and also the connection between human and animal. Diane Lane did an amazing job and John Malkovich is hilarious in a tame, but clever role. It’s the first movie I’ve seen in a long time where you could feel the emotion in the audience and everyone genuinely clapped at the end.